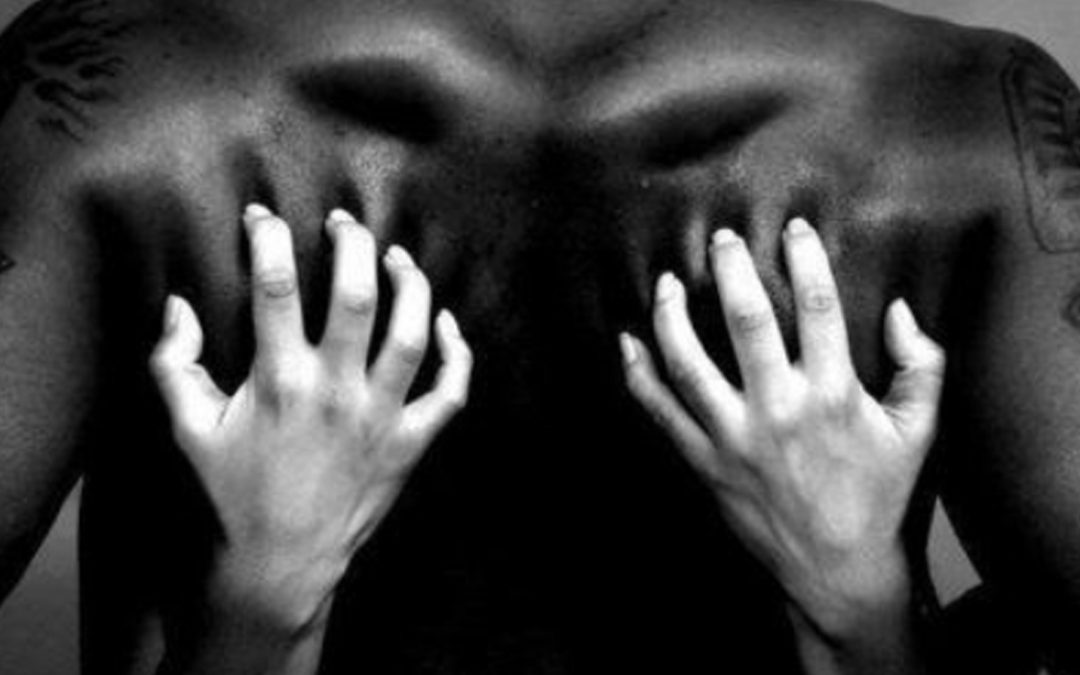 She takes him out, and he is large and beautiful, standing at attention, he moaning as she caresses him in her hand, she kisses his nipples his navel his everything inching down down down down, he moans he holds he caresses he kisses, the softness of his skin the power of his arms

She sits in her red red room, her plush cushions surround her, an air of excitement rises up in her, she takes a breath, he is near.

The palpations of the heart, that smile that crawls into the soul from every crevice everywhere. That tingle when you first hear that voice, feel that touch, see that smile, lock eyes.

That millisecond when you know when you realize that that which was not allowed will now be, that the gates of the heavens have opened, lightning has struck, the lotto numbers have been announced, and now yes now yes now this moment is the moment when two souls will find each other, that space where the entire body shouts and is alive and cries out YES! Cries out NOW cries out HOW cries out. Silently, but with all of you, your insides and your outsides, where your Self becomes so huge so grandiose so ginormous and all of you fills the universe so brightly so magically all because this one person this one other being in the world has seen, sees, feels, is excited, has noticed has opened has valued has expanded has dropped in has checked in has felt and is feeling and knows and is learning and is fascinated and wowed and enlivened and touched and connected with you, none other than you. And it’s not that it’s you it’s that it is s/he who sees you, this one other person who you have noticed and felt and known and dreamt of and been excited by and wished for and longed for and get so excited by that your whole body shakes THIS this one one person is the very person who is at THIS very moment is leaning towards you. Who has broken the barrier of no return, the barrier of you and me, whose head is inching nearer whose eyes are getting softer whose whisper of a breath you can feel on your face….

Touch. Soft and tender tingling. She licks her lips. Closes her eyes.

He is there, chocolate and delicious, his voice melodious and full, his large hands tickling her everywhere, her back, her hair, her arms, her hands, he went there -anywhere – living in the intimacy of the simplest touch. He was staying in a palace, a New York city palace, that’s where he would stay when he came to teach, where she found him in a free yoga therapy class, teaching, what else of course, but anatomy. “Rest and digest,” he would croon, breaking down the parasympathetic nervous system as only he could, and that voice would turn on everything in her. He was about her age now, at the time, she realizes; it was if she had been living in another universe, another being altogether, a 20 something performer thriving in New York… The next time he came to teach it was everything and they went at it in that palace clothes rolling off like condoms completed of their use, jumping into each other’s skins catapulted to a world of sensuality and pleasure…. And then that moment that very moment when he may have he might have but she wasn’t quite sure, but she also was so sure, and then he stopped “if you’re not sure, we shouldn’t” – what? Wait, what?!? – shouldn’t he convince her now by words or by touch-by his every perfect touch- but instead he stopped and decided for her that she needs to check in for herself. Oh. Ok. It stopped, slowed down, as the night ended sweet and slow, inching towards a halt.

The next fucking night she was damn fucking sure. Her body calling to him, practically ambushing, planning the attack ever since the denouement. The hellos the small talk the slow kiss the touch, the clothes off the touching god that touching, his fingers knew exactly where to go where to touch how to touch, his voice deep and soothing, his hairless body, powerful hold,tickling and touching, tingling and powerful every single sensation giggles and sighs, panting and pleasure.

She takes him out, and he is large and beautiful, standing at attention, he moaning as she caresses him in her hand, she kisses his nipples his navel his everything inching down down down down, he moans he holds he caresses he kisses, the softness of his skin the power of his arms, the perfect fucking skill guiding her every which way, as she moves his hips on top of hers.

“You sure?” he mumbles, though this time he can barely get the words out, as they fumble for the condom, because words won’t stop her, can’t stop her, and even though he is just the third person she had slept with she has never been so damn sure of anything, her body every damn body deserves a little Antonio in their life, beautiful sensitive, massive, skillful healing and gut wrenching filling so filling, he turns her over, or does she turn over, she can’t remember every bit of her is open, engorged awaiting reacting – oh, the pain, in remembering, in connecting to thet joy to that bliss, to that – he is entering her, and she has never felt so full, so engulfed, so engulfing, a rush of shudder of otherworldly rainbow iridescent light and power, the overwhelming overarching tingle pouring through her veins…. She has been transported she is somewhere she’s on mars she is venus it lasts a lifetime, or only a second she realizes as he comes to her body has shuddered and traveled, she has soared to such pleasure, she is here, he is still in her, an eternity a short trip some kind of heaven, no heaven is too “good” to be that gooood. And he’s still in her and it’s still wonderful, but these seconds have been hours and yet it’s just been seconds and she can’t even begin to understand how he hasn’t come because she has and she is and she is and she is and she is and she is and she is and she ….

And then FOREEEEEVER  later he tenses and releases and they both collapse, a pile of bodies as beaten as two corpses, but wet and hot and writhing and very much alive. She has drifted she is ocean she is stream she is – her throat catches, her tears lift, her heart aches, her body mourns, she deserves this doesn’t she? She can have this can’t she? She needs this doesn’t she? Tears stream down her face now, her body begging for some love some attention some knowing after all it is here here to serve her every need…

It has been ages. Since she remembered, since she traveled to that place, it was only earlier that day that she realized she could she would all she needed to do was to set pen to paper, to open the page and to write, and there he would be, her magical antonio, gallant and gorgeous upright and ready, standing at attention, just waiting to be engulfed, her legs knowing exactly where to wrap around him, a dance of two bodies just knowing every move, giggling and playing laughing and rolling joking and exploring sharing and pleasuring.

To pleasure another. To feel deep pleasure just in being in the presence of another. She can barely remember. She knows it, sure, when her child crawls onto her lap, or is excited to just see her, and she theml, that mutual light up that happens every day and multiple times a day, she knows even the difference in the mother child chemistry of each of her children, the desire to hold or cuddle or discuss or enlighten or just be…

She knows too that sense of recoil of disgust of pure apathy a person can feel from a partner, she feels it every day from him as he rushes past her unseen and untouched, heading to his repose the gambling room upstairs…. She doesn’t really mind, most of the time, she feels it too, they never really had it, they had a dream, they had good times, they shared wishes and hopes and fantasies. And children. They share children.

The tears build. They are stuck now in her throat. Pushing and building up like a boiling water rocket pushing to break through, “it’s fine,” she often thinks, “there is so much good here, so much privilege, so much happiness, so fun, there are friends here, we are friends here, what will happen if it’s all undone?

This body has been silent. These tears are all pushed down. This voice doesn’t shrill or pant or beg or moan this head doesn’t roll back these eyes don’t half shut this body doesn’t shudder this soul doesn’t still fly, there is no melodious voice there is no inching closer no sense of wonder or alive no flutter just from the moment this moment of together no knowledge you are there, someone is there, who loves her more than anything who cherishes her every move who sees her feels her loves her dreams of her fantasizes wishes yearns dreams of her her her her and that that person that soul that touch that hold those few seconds that sing for an eternity, that now here in the dearth of everything those few seconds so alive that my insides tingle and remember every last sensation now as were alive 20 years ago, a halt of time of space of heart of body.

Thank you. Thank you, she whispers, Antonio, for your gift to me. For the reminder that everything is not “fine” that I felt more alive in those few moments with you than i have felt in a very long time. And yet, I do not yearn for you, Anotonio, my friend, my heart, my brother, it has mutated now, I see you with your love and I am deeply happy for you, my dear dear friend. I see your soul smiling as you travel the world with its mate. My heart sings as I feel it. You give me hope. You once were tied to the all wrong person and you broke free. And now you and your queen galavant around the world wearing your love as proudly and beautifully as you should. It is no small task to emerge from that voyage victorious. Open and in love after battle wound after battle wound avenging in the high torrid seas. I honor you, Antonio, you and your beautiful queen, for you give me strength. You, who knew this body intimately who voyaged with me and lovingly ravaged me and befriended me and lent me your healing wand. You dipped in your sword and anointed me. I too will break my chains, strip away my bondage, find the courage to announce my truth, declare my independence, steak my flag and fleeeeee! And then one day, HE will be there, not in a world long ago, not in a dream, not in a yearn but in a here in a now in every whispered moment, in every word, every caress, it will be HIm. And I. Will. KNOW.